Rockid Sound Machine
A. Pyramides
B. Intergalactic
(No Half Steppin')

It has come to our attention that a mysterious force is loose, somewhere in outer space. The interstellar forces at play are directly responsible for the music created by the Russian four piece known locally as Rockid Sound Machine. This Soviet sonic sensation bum rush the planet with a healthy double dose of moody, breakbeat funk on Chrome's No Half Steppin' label. On 'Pyrimades'  the listener is treated to a sound so other worldly that the master tapes were beamed down to the No Half Steppin' studio from a remote satellite in the outer rim. On 'Intergalactic'  they treat the extra terrestrial b-beings to some upfront funk breaks that is bound to loosen up them most frigid of bounty hunters. It is fair to say that Rockid Sound Machine boldly go where no other group have gone before. 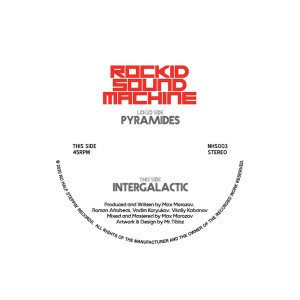