45 Live
At The Masked Ball

It feels absolutely brilliant to have a real show in the diary, and to begin getting back to normal, hopefully. And what better way than to join again with the brilliant Masked Ball crew in Cornwall for what is guaranteed to be an all-night marathon of high octane party platters with the bonkers MB crowd. A crowd who'll this year be up-for-it more than ever, no doubt! It's going to be a large one :) 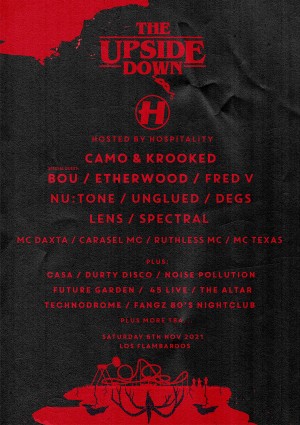 At The Masked Ball

We're heading back to the infamous Masked Ball for another ALL NIGHT 45s throwdown at one of the craziest parties in the country. Last year was totally amazing with '45 Years Of Hip Hop', which was a stonkin' good knees up...and we're going to throw those knees up again as Boca, Pete, Ollie and Alex going deep into their crates for a full-on freestyle session till the early hours. Expect everything from soul to beats, acid house to disco, funk to boogaloo, 7" stylee all night long. Leave your marbles at home, you won't need them at the Masked Ball.

Plus there is of course all the other stages! 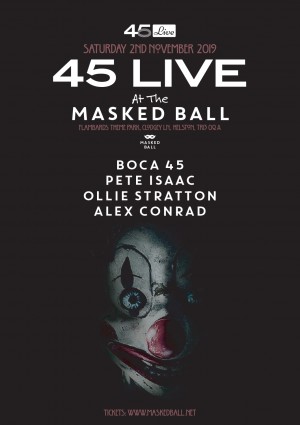 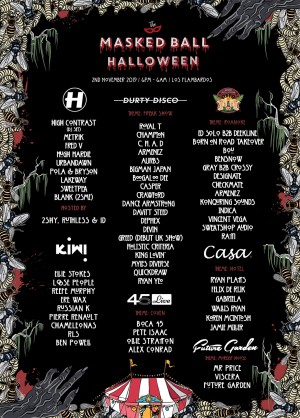 45 Live at The Halloween Masked Ball

We are back at one of the best parties this country has to offer. An all-night rave upon the clifftops in Cornwall! The Masked Ball is into its 12th year (I think), and continues to offer up a crazy night of hedonism, amazing music across many genres with a totally bonkers crowd of 'ballers'. 45 Live has been running a stage here for the last 4 years and we're confident in saying it's the best party we do all year. As always we present a killer line up with some of the crew's heavy hitters, this will be yet another belter! Don't miss it. 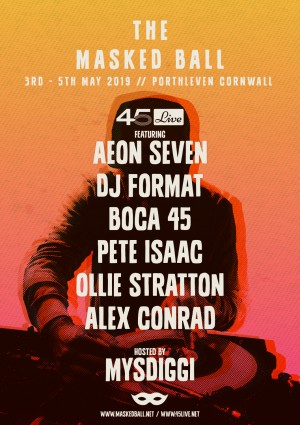 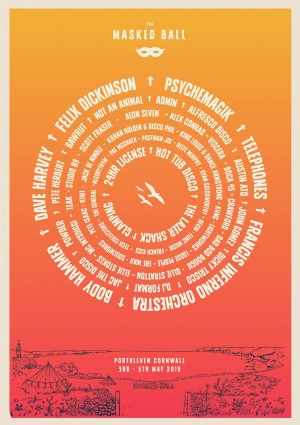 It’s 45 years since the official birth of hip-hop, from Kool Herc’s block parties in New York to world domination. It was 1973 when the notion of mixing records and extending breaks first took hold, and with it came rapping, breakdancing and painting, not forgetting the fashions and indeed the social aspect which saw creativity take the place of inner city violence.

The cultural palette that Hip Hop draws from is vast, and when sampling became ever more accessible, the musical direction of hip hop as an art form exploded. Especially from the late 80s onwards - the Golden Era - which is aptly termed. The likes of De La Soul, ATCQ, Gangstarr, Main Source and a million others took their MPCs and concocted layers upon layers of invention, creating an endless stream of spectacular records.

45 Live is going to celebrate these past 45 years, drawing upon hip hops influences from funk to soul to post punk and beyond, and of course spinning many a classic hip hop joint, all on 7” 45rpm singles!

45 Live’s main men Pete Isaac and the block rockin’ Boca 45 will be joined by 2 x time world champion DJ Woody. Woody is often referred to as the best DJ on the planet, constantly. His inventiveness and outright skills on a pair of turntables is literally breath-taking. From performing as a standalone DJ to turntablism as part of a live band, he can do it all.

Also on the bill is the incredible DJ Cheeba, another turntablist of fine repute. Hailing from Devon originally, Cheeba has forged a career through Solid Steel, Ninja Tune and more recently as a D/VJ performing incredible shows from music based themes to re-scores of movies on 2 x turntables, a mighty talent.

Performing LIVE will be golden era UK hip hop from Caveman. Their seminal album ‘Positive Reaction’ dropped in 1991 to great acclaim, featuring the stone cold classics ‘I’m Ready’ and ‘Fry You Like Fish’. The whole album is a masterclass in hip hop, sublime sampling creativity, dope rhymes and a strong positive message, and funky as hell!

Hosting the whole night will be rapper/MC Mysdiggi, now the house MC of 45 Live, Mys has been ruling the mic at the last few Masked Ball events now, and is a force to behold! 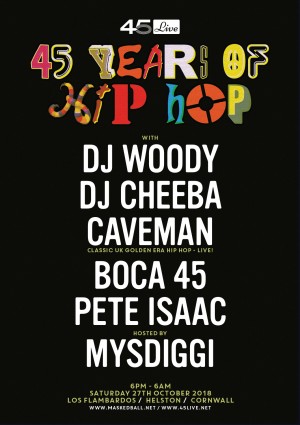 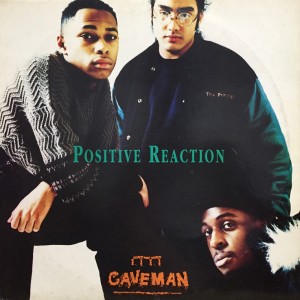 45 Live is back at Cornwall's infamous Masked Ball this coming May. Set on the clifftops overlooking the sea in Porthleven, Cornwall, this all night party is one of the best shindigs in the country.

For this one, we are boarding 45 Live Airways, and piloting the decks for your 7" 45rpm inflight entertainment we have: 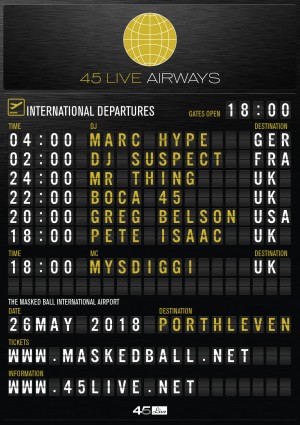 45 Live is back at the Halloween Masked Ball after last year's truly epic session. We're going BIG this year with Format & Abs + Too Many T's LIVE alongside a heavyweight DJ lineup. Trust us, this event is heavy, 12 hours of hard core party bizniz. Don't sleep, get those tickets in your cart now... 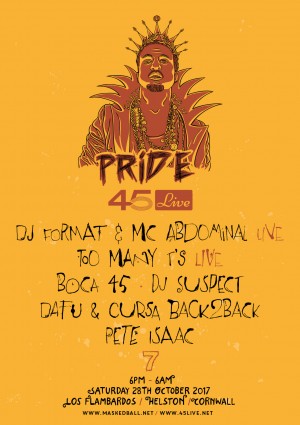 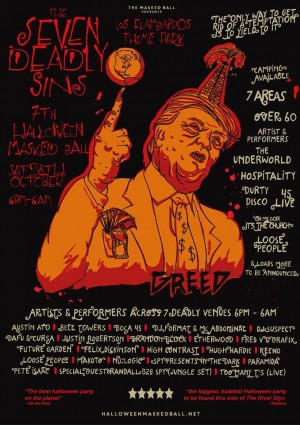 45 Live is setting up shop again at the brilliantly bonkers spring Masked Ball, perched on the clifftops above Porthleven and populated with one of the best totally up-for-it party crowds you'll find anywhere. We have a kick-ass line up this year, with Smoove making his way down for the first time and Aeon Seven coming over from France , plus the fabulous DJ Food, Boca 45 along with Pete Isaac and Dan Walters. We are marking and celebrating the birth of hip hop with Kool Herc's famous block party on 1520 Sedgwick Ave in the Bronx, funk, post punk, early rap, disco and beyond. Plus live graffiti artists and more. The ultimate Get Down! 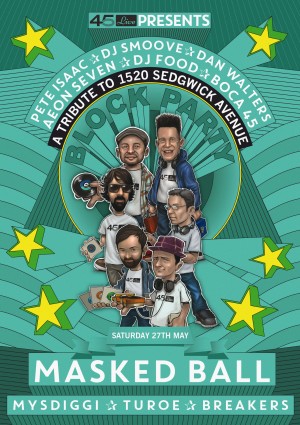 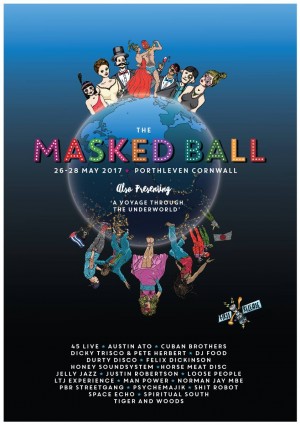 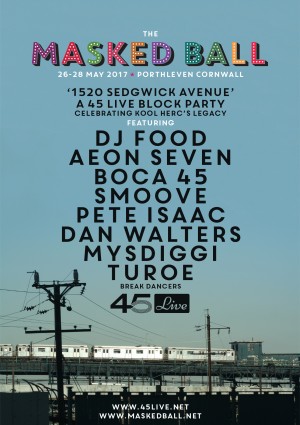 45 Live is back again at the mental Masked Ball Halloween party down in Cornwall featuring a heavyweight lineup. P.A.R.T.Y!

Get all the info and tickets here: halloweenmaskedball.net/tickets/ 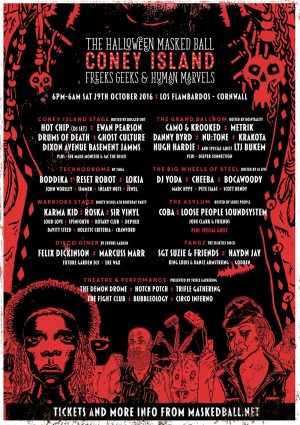 45 Live at The Masked Ball

We are back at the incredible Masked Ball event this May, to get involved with their epic 10th anniversary mega-party!

Cut into a cliff-top near Porthleven and overlooking stunning Mount's Bay, the Masked Ball is an immersive multi-level party kingdom populated by a kaleidoscope of cool and crazy characters, all dressed to excess.

Having recently announced plans for their ‘decade of decadence’ 10th anniversary festival, The Masked Ball can now reveal that Groove Armada, 2ManyDJs, Norman Jay MBE, London Elektricity and many more are also set to join their creative weekender on 20th – 22nd May.

The 10th birthday Masked Ball - this year staged over three days, each with its own very special vibe - will boast 12 elaborately-themed arenas, there'll also be whole new area modelled around 'A Manor House' - a stately home inhabited by the most debauched and demented members of the aristocracy, complete with its own unique take on the traditional garden fete and featuring bizarre attractions like live pig racing, a huge waterslide and hot tubs.

Shaping up as what’s set to be an incredible showcase of talent across the electronic music spectrum, the first to join festival headliners Basement Jaxx and Jungle is Groove Armada, who will return to Porthleven after making their festival debut back in 2014. Eclectic selector’s 2ManyDJs – the touring alias of Belgian outfit Soulwax – are also billed, whilst purveyor of ‘Good Times’, the legendary Norman Jay MBE, will deliver a masterclass in turntablism for partygoers seeking an injection of funk, soul and jazz. Elsewhere, an appearance from drum and bass institution London Elektricity is scheduled alongside MC Dynamite, with creative party-starters krankbrother no strangers to the festival’s themed proceedings.

With a host of support also coming from the likes of Solid Steel’s DJ Cheeba who will be providing an extra special tribute to the late great David Bowie, as well as Stockholm club scene stalwart Mad Mats, The Masked Ball’s immersive offerings will be just as impactful – providing a multi level party kingdom where themed venues range from the outrageous to the downright spectacular. Expect a myriad of rooms, dancefloors, dens, hidden bars and even bathtubs that are all themed around a majestic stately home, making The Masked Ball’s ‘decade of decadence’ milestone one certainly to remember. 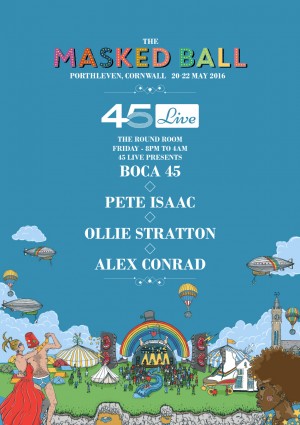 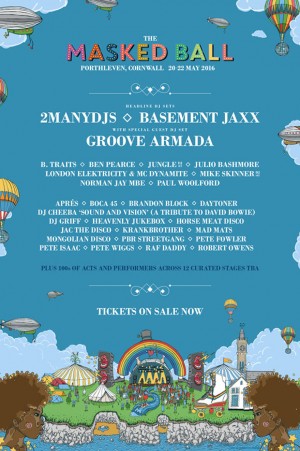 After 45 Live's inaugural show at the last Masked Ball in May, they have asked us back to run another stage at their utterly crazy Halloween event. With a Lost Boys theme, and set across a massive 12 stages, this truly is a monster party!

We have a massive line up too.. 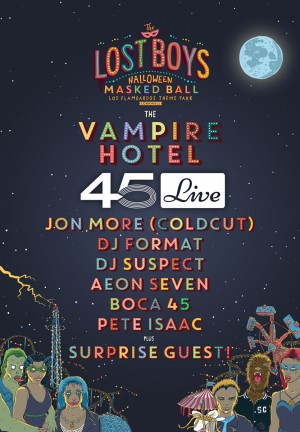 The Masked Ball is Cornwall's premier party, a bi-yearly event that thousands attend, always sells out and is absolutely brilliant! It's a mammoth 12 hour party on the Saturday with a Sunday session thrown in for good measure. With loads of stages on a beautiful clifftop site overlooking the sea, and a MASSIVE line up covering many music styles, with BIG names alongside the SW's best on stage, it's basically THE summer party to be at in Cornwall.

45 Live is thrilled to be booked to host our own arena for an all night 45's marathon, in our 45's themed tent too! 4 of the 45 Live team will be behind the decks - Andy Smith, Ollie Teeba, Boca 45 and Pete Isaac, plus we'll be joined by Cornish DJ duo Mongolian Disco. There might be a couple of surprise sets from sneaky special guests too. This will be the first full 45 Live event at a festival, bring it on!

Expect an explosive mix of music, from Hip Hop to soul, funk to jazz, psyche to blues, Rock n Roll to Boogaloo, everything will be in the mix, and ALL on 45 of course!

Full event info and tickets here: maskedball.net/
Dont hang around to get tickets, this always sells out! 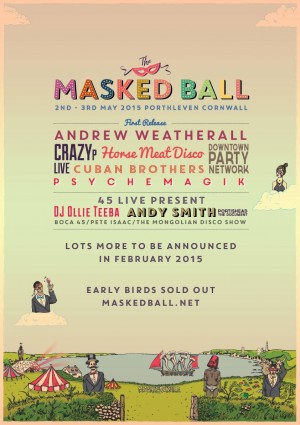