To put it bluntly, DJ Woody is going to blow your mind! This 2 x world champ DJ is one of the most creative and gifted people to have ever handled a pair of turntables. Highly respected by DJs across the globe for his boundary-pushing technique and loved by audiences for his natural ability to completely rock a dancefloor.

Believe me, this is a special one! It's not often DJs of this calibre grace the turntables in Totnes. Get your advance tickets fast, you really don't want to miss this one. 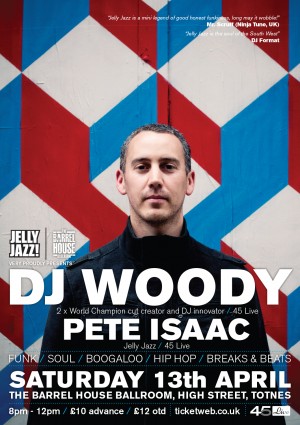 Fresh from an amazing summer playing festivals around the UK and Europe, Pete and Scott will be bringing their block rockin' donuts to Totnes for an all vinyl party taking in soul, funk, hip hop and dancefloor curveballs to kick up a storm.

Their 45 Live project is going from strength to strength all the time, with 45 Live Records currently on release No. 8 with UK hip hop legends Outlaw Posse about to drop. Plus forthcoming events in France and New York. You can also now subscribe to the excellent 45 Live Radio Show on iTunes, just search 45 Live Records.

As you know, the Barrel House is small, so don't wait too long to get your tickets. 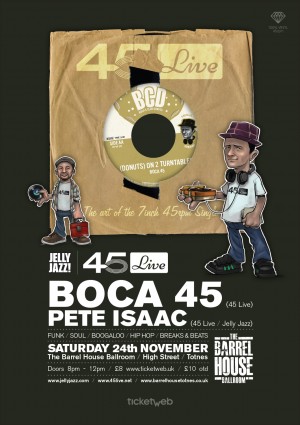 Miss 45s' first gig with 45 Live alongside co-CEO Pete Isaac in the bohemian hotbed of crazyness that is Totnes! Miss 45s aka Corrina Greyson is not only a great 45s DJs, she's also a recording artist in her own right and has just collaborated with heavy funk outfit Lefties Soul Connection (can't wait to hear this!). Come and join Corrina and Pete as they delve deep into their 45s crates and drop a shed load of heavy funk, funked up soul n' jazz and funky breaks n' beats. 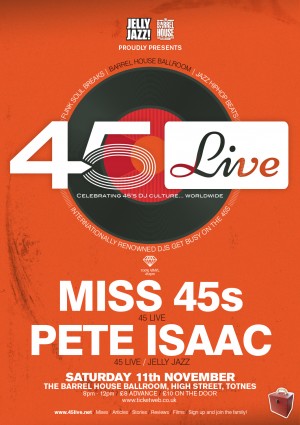 Jelly Jazz's Pete Isaac is back at The Barrel House after the last crazy packed night back in April. This time he is joined by his partner in 45 Live, Boca 45. One of the most amazing DJs in the country who slings those lovely 7" singles with the utmost panache, explosive energy and turntable skills. Expect block rockin' funk and hip hop with a dash of soul, psyche and boogaloo. ROADBLOCK! 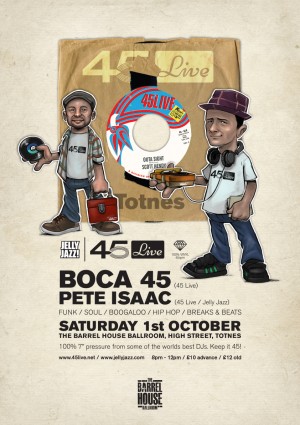 Hot on the heels of Plymouth's new regular 45 Live show, we will be touching down in Totnes for a one off party at the gorgeous Barrel House Ballroom, a fabulous space with a gold leaf ceiling and a STONKINGLY awesome sound system! 45 Live head honcho's Boca 45 (who's jetting in from Strasbourg) and Pete Isaac will be manning the 7" platters that matter. Expect a killer set of funk, beats, hip hop, soul and all manner of psychedelic musical treats. 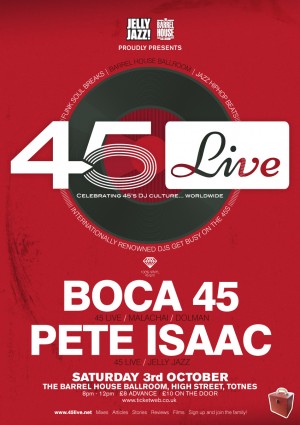 Jelly Jazz and The Barrel House proudly presents 45 Live with the world famous DJ Andy Smith. This globe trotting DJ was the first DJ to release a multi-genre mix album on a major label. When his mix-CD The Document hit the streets back in 1998, it became the soundtrack for a generation who had heard Coldcut's Journeys By DJs but needed to hear more - The Document filled the void. It segued tracks from artists such as Tom Jones, Peggy Lee, The Jungle Brothers and The Spencer Davis Group. A mixed bag of treasures has always formed the typical contents of his DJ set. This appreciation of different genres made Smith the ideal person to provide sample material for Portishead on their first two albums. He went on to make his name as the band's international tour DJ – reflecting their respect for both the art of digging for breaks and hip-hop scratch DJ-ing.

Since the Portishead tours he has established himself as an underground producer of some of the most irresistible hip-hop breaks-based music around, working with Scott Hendy (Boca 45) under the name Dynamo Productions. The Document mix-CD series followed on the success of The Document, which sold in excess of 100,000 copies, Andy released Document 2 and Document 3 to critical and popular acclaim. Other releases under his belt include The Trojan Document in 2006, Andy Smith’s Northern Soul, Lets Boogalooo Vol 4, Diggin' in The BGP Vaults, New Orleans Funk (compiled with Dean Rudland), Andy Smith’s Jam Up Twist and Jamaica Funk (compiled with Keith Lawrence).

Andy regularly appears in clubs across the world and his strong cult following has secured him constant DJ bookings including his nine year residency every Saturday at Madame Jo Jos (London). Andy also runs his Jam Up Twist night every Thursday at Joe’s bar in Camden Town.

2015 will see Andy join forces with Jelly's Pete Isaac, Boca 45, DJ Format and a bunch of top drawer international DJs for a new music project called 45 Live. All will be revealed in December this year! 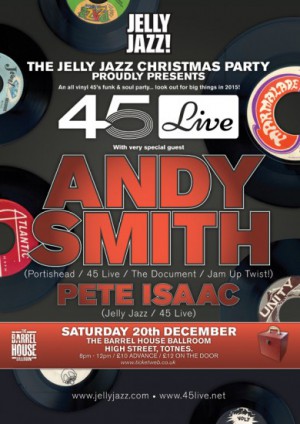