45 Live continues into 2020 with the co-founder and CEO of 45 Live heading over from the UK with a stack of nosebleed funk and soul, breakbeats and afro Latin goodness! Backed up by local legend and resident DJ Baz Hickey.

Pete Isaac is best known as the DJ promoter behind the seminal southwest club-night Jelly Jazz since January 1993, which saw its 25th Anniversary in 2018, a major milestone for any club night.

In its early days during the height of the southwest's rave culture, Jelly Jazz started out to provide a weekly diet of soul, funk, latin, hip hop and break-beat all with a jazz twist to them. The blend worked and the unpretentious, 'sweat dripping off the walls', 'dance till you drop' attitude and atmosphere driven relentlessly by the musical passion of resident DJ's Pete Isaac and Griff soon became a major force in Southwest club-culture. Fairly soon Jelly Jazz developed an international reputation and was attracting the likes of Gilles Peterson, Norman Jay, Mr. Scruff, Quantic, Patrick Forge, Chris Goss, Andy Smith, Russ Dewbury, Rainer Truby, Jazzanova, and DJ Format as guest DJs. Plus legendary live shows in the southwest from the likes of Pucho & The Latin Soul Brothers, the first ever show in Europe from Sharon Jones & The Dapkings, Blue Note legend Lou Donaldson, The New Mastersounds, The Quantic Soul Orchestra, The Bamboos, Sugarman 3, Snowboy and the Latin Section, Manteca, Kokolo Afrobeat Orchestra, Saravah Soul, Ugly Duckling to name a few.

Since early 2015, Pete, along with Bristol DJ Boca 45 set up ’45 Live’, a celebration of the 7” vinyl format. Comprising of an international crew of DJs that come together in various combinations to play club nights and festivals in the UK and Europe. With some big names in the crew like Jon More (Coldcut), Andy Smith, Marc Hype, DJ Format, DJ Food and world champ DJ Woody, 45 Live has been rocking dancefloors from Newquay to Nice, Bristol to Berlin and beyond. 45 Live Records was born early on too with many releases pressed up so far taking in dancehall, hip hop, soul and breaks from artists including The Nextmen (UK), Aeon Seven (FR), Andy Smith (USA) and Boca 45. Plus there is the 45 Live Radio Show which Pete and show host Greg Belson coordinate and produce on Dublab in Los Angeles. 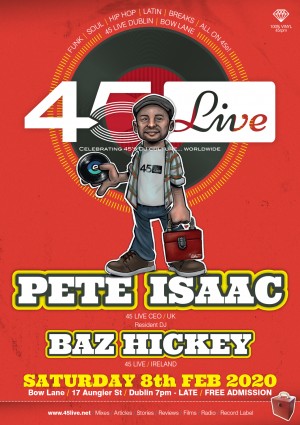 All roads lead to Bow Lane on December 28th where the 45 Live crew proceed to carve out some choice 45 cuts for the festive turntables. Strictly 45s business. 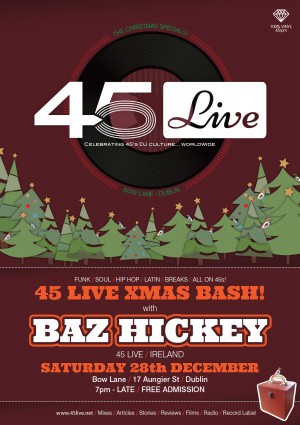 45 Live in association with Bow Lane Social Club are very proud to announce the first Irish show from Mr Thing in 13 years. Support on the night comes from Baz Hickey (45 Live Dublin).

Mr Thing first started DJing in 1987. He said recently- “the first hip-hop record I bought was Streetsounds Crucial Electro, first import 12" was BDP "Poetry", first actual record was ... (cringing) Adam & The Ants "Kings Of The Wild Frontier". From these humble beginnings Mr Thing went on to become one the worlds finest DJ’s as testified by the following accomplishments.

Marc Bowles AKA (Mr Thing) didn’t simply rest on his laurels by simply spinning records. Along side amassing a fantastic record collection from digging trips across every continent, he practised his production skills and has gone on to remix and produce records for a credible assortment of UK acts. BBE Music and Mr Thing have known each other for over 10 years and it was just natural that a collaboration had to happen. The result is Strange Breaks and Mr Thing – a five part ultimate breaks and beats series. A homage to the popular Strange Games Series on the label. Mr Thing said “I wanted to do an extension of my "Anorak" series of mixtapes, which were already a homage if you like to Kon & Amir, Muro & the Conmen etc, but put some stuff out there that covered all bases of music & breaks from the ultra rare to some reasonably common stuff people might have passed up before!”

Mr Thing has several remixes, productions and compilations released under his name. Highlights include the "GROWN MAN BUSINESS" ALBUM with YUNGUN & Remixes for various artists such as FOR INJA (FEAT FALLACY & SKINNYMAN) "HAT LOW" AND KIDKANEVIL (FEAT JEHST & SIR SMURF LIL) "DEF CERTIFICATE" (FIRST WORD RECORDS) At the moment he is working on tracks for YUNGUN, JEHST, MYSTRO AND SKUFF & INJA.

Mr Thing recently composed the music for the MARS PLANETS AD CAMPAIGN. He is featured on PRIT KALSI'S DVD Documentary "KING OF THE BEATS VOL.2", this contains an extended interview with Marc and pictures/footage of his record collection. 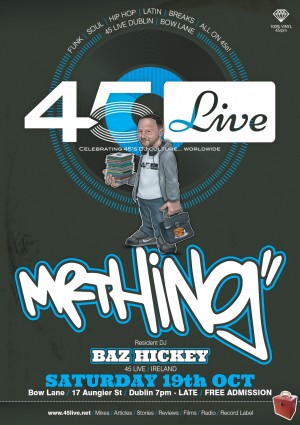 45 Live has a new residency in the unique city of Dublin, a natural home for the no-nonsense party vibes of a kickin' 45s session from Baz and guests.

Launching on Friday 20th September, Baz has invited 10 guest DJs to come and play! He'll be announcing the full line up imminently on social media - check the Facebook event HERE for further news.

And throughout the year, DJs from the 45 Live crew will be popping over to play too.

And to sweeten the whole deal, it's FREE entry too! 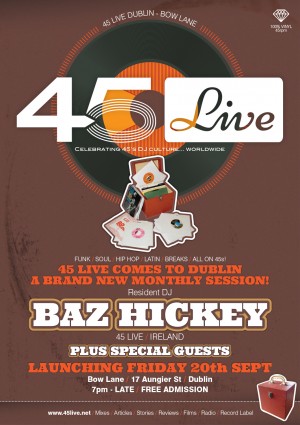