1. Where are you based?
The ancient Roman city of Londinium. Light of the world.

2. Why 45s?
Always liked them. I think the first records you have when you are a child are 7”, so it starts there. There are practical reasons too. Like, the fact that I can carry far more music than if I were dragging a heavy crate of 12” around and a bag of 45s weighs not much more than a Serato/Traktor/Laptop set up. I also, unlike some, prefer the 2-3 minute edits of tracks because they get to the point quicker than some 12"/LP versions.

3. Your inspiration/mentor/hero?
My original inspiration for DJing was the OG Hip Hop DJs cutting up breaks in the 70’s and 80’s. Grand Wizard Theodore, Afrika Bambaataa, Jazzy Jay and the much underrated Grandmixer DST. I was already into music as a kid because my parents were but when I saw Hip Hop DJs doing their thing I said to myself “that’s what I want to do”.

4. Your most elusive 45, what is it and how long have you been looking?
The most elusive 45 was Sugar Billy Garner 'I Got Some'. It took me 20+ years to find one, and in all that time Greg Belson was the only dude I knew personally that had it and he wasn’t giving it up, lol. I did get one a few years ago and it is my most expensive purchase to date.

There is a whole bunch of Hip Hop 45s that I still need to find. I was a bit slow with that. I never used to collect Rap 7”, always 12”. I only used to buy Funk and Soul on 45s but when I switched back to vinyl after 6 years of laptopping, I went to playing just 45s because I just couldn’t face carting around heavy 12” bags/crates. I realised there was a number of Hip Hop tunes that I still wanted to play and was so mad at myself because I would have had a number of opportunities to grab many of these tracks on 7” for a quid or even nothing at all as I used to work in record stores in the early 90s and they were literally giving this stuff away.

5. Best ever dig?
Well my best digging story is a soundtrack LP that I, through the power of thought, willed into a crate of records I was leafing through in Chicago. It was ‘Bedazzled’ by Dudley Moore. It was the mid/late 90s and I had been searching for it for 20 years and had almost given up. I was going through a section of records and stopped and thought to myself “I WILL find you in THIS CRATE”. I flicked through not more than 7 LPs and there it was. I kid you not. $25.

As for 45s. I picked up Dynamic Corvettes 'Keep off the Grass' / 'It’s a Trap' in the basement of Black Market records when it first opened in (I think) the late 80’s. I was just curious as I loved Funky Music is the Thing. However, this one is muuuuch rarer and dope as f**k.

I had a good fluke on eBay about 3  or 4 years back, when I copped a Brazil press of Babe Ruth 'The Mexican', full length 33 cut for just over a tenner. Some loud crackles and pops in the flamenco intro but the rest of the track plays beautiful.

6. All originals pressings?
Nah. I prefer to always find the original if I can and it is affordable. However, some of these joints are so hard to find in decent condition and for a price I can stretch to, so in that instance, I’ll cop the reissue. Also, if the OG is pressed on styrene, even if I already have it, I will buy a vinyl repress.

7. Do you hoard or buy and sell?
Hoard. I intend to sell some but I’ve not been getting my sh*t together.

9. Cover up or share the love?
Share the love. I don’t keep secrets where music is concerned...

10. What’s your top 3 LP tracks that you wish had been pressed onto 7”?
These are just 3 random ones that I just remembered but there are tons more, Clarence Wheeler and the Enforcers 'Right On'...

11. Biggest disaster whilst DJing?!
Playing Buffalo Gals on a system that I was, at the time, unaware was only outputting through one channel. Buffalo Gals has all the beats hard-panned to one side and the scratches and vocals to the opposite. So, I play the track to a room full of people feeling the beats and.......no beats. Instant accapella. I had to get the next record on quickfast before it got ugly... 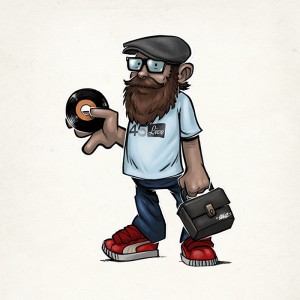