Firmly seated at the top table of UK Hip Hop for many a year, Matt continues to drop the most excellent music as perfectly heard on his new LP - Still Hungry - with MC Abdominal.

1. Where are you based?
Brighton, England.

2. Why 45s?
Because they are usually pressed louder than LPs and are always easier to carry when travelling to gigs!

3. Your inspiration/mentor/hero?
The DJ who I first saw cutting up 45s effortlessly & precisely was Mex (in Brighton sometime in the mid '90s) so I think it's important to credit him. I'd bought & collected 45s before that but usually only if they were cheap, I never liked handling them and definitely didn't have the confidence to DJ at clubs with the awkward little things. After seeing Mex cutting classic break after classic break so brilliantly it made me rethink things.

4. Your most elusive 45, what is it and how long have you been looking?
I can't reveal that publicly or it's even less likely I'll ever find a copy haha! Most things turn up eventually but there's quite a few Rap 45s I've been looking for for years and I'm happy to accept I'll probably never own them. The thrill of the chase it sometimes the best bit anyway.

5. Best ever dig?
I found a mint copy of Ultramagnetic MCs 'Give The Drummer Some/Moe Luv's theme' for 20p in a charity shop on the outskirts of Leeds in the mid-late '90s...but nobody cared about Rap 45s back then.

I also found MC EZ & Troup 'Get Retarded/Just Rhyming' for 10p from a charity in my hometown of Southampton around the same time.

6. All originals pressings?
Yes I'm afraid so. It's a bit nerdy and I don't expect everyone else to play by my rules, but that's just how it is for me.

7. Do you hoard or buy and sell?
I do hoard but I also try to sell/trade with friends whenever possible. I have no time or interest to sell online because there's a lot of fussy & dishonest people out there.

8. How many 45s have you got and how do you catalogue/store them?
I've never bothered counting them but I've got 5 big shoeboxes of Rap 45s plus about 12 or 13 shoeboxes or other genres. All the Rap 45s are filed separately (alphabetically) and then I have sections for European, Reggae, Latin/Brazilian/African and then everything else is thrown in together and alphabetised.

9. Cover up or share the love?
It depends on the record...and who's asking! I mostly share the love but sometimes you've got to keep certain things to yourself, otherwise everyone ends up playing the same records and it's very hard to stand out from other DJs and be original.

11. Biggest disaster whilst DJing?!
I was DJ-ing at a friend's 40th outside a bar on Brighton seafront and a drunk woman lost her balance whilst dancing and fell against the table with the decks & mixer on, completely taking everything out in one swift move! 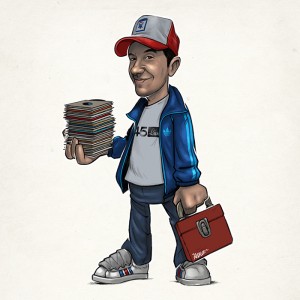