The Allergies
A: Dance Now
B: Fade Away
(Jalapeno)

The Allergies first met vocalist Honey Larochelle on a cruise ship disco dance that the group were hosting. She grabbed the microphone on the opening night of their month long residency and a fantastic relationship developed. Inspired by the night’s events, that night in her living quarters she put pen to paper and the next day she delivered the vocals for ‘Dance Now’ to The Allergies. Once The Allergies added their beats and breaks to the mix with the aid of a custom built sampler (more about that later), it quickly became a favourite among the cruise passengers and it’s now a big hit on land too!

Back on Terra Firma the mic is passed to Long Beach hero Andy Cooper as he proceeds to perspire vocab sweat bullets like no other emcee on 'Fade Away'. The Allergies are there to wring out the sweaty headband into the MPC60 sampler brain juice slot. They give the machine a shake and once they’re satisfied they’ve enough juice they begin the arduous task of meticulously analysing the Ugly Duckling emcee’s DNA and matching it with some loops and brass parts. It’s all done in that Allergies style we have grown accustomed to hearing in the best possible taste. What pops out in the end is a shiny new vinyl 45 for everyone to enjoy!

From The Allergies:
"Of course none of this is true, but that’s what I like to imagine when I hear this banger. In all honesty, The Allergies got Honey’s number off their bass player, Johnzy, and they set up a recording session in L.A .with Andy Cooper. In fact, they’ve never met. But that doesn’t sound like much of a story. Fantasy trumps fact, once more." 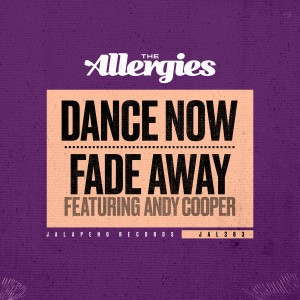